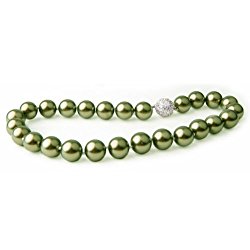 Willow Companys Voyageur Pearls are chemically similar in material, weight and luster to natural and cultured pearls. These are man-made pearls produced from the shell of Hyotissa Hyotis also known as Mytilus Hyotis and commonly referred to as the Giant Coxcomb Oyster or Honeycomb Oyster native to the Indo-Pacific region. The raw material for the base or nucleus of the shell pearl is a natural mother-of- pearl bead, from the Hytotissa Hyotis. Fresh shells are harvested and cut, cubed and manually rounded into shape; coated with as many as 28 layers of color and protective finish to create our South Sea finish and grade AAA and AA quality. The depth of color and luster is enhanced using man-made materials combined with dyestuffs commonly called 'pearl essence' or 'pearlescence', which is the iridescent silvery ingredient found in certain fish scales. Also known as essence d'orient, it was discovered in 1656 in Paris by a French rosary maker, Jacquin, who isolated guanine crystals from the fish scales to produce a pearly suspension. Guanine in fact are rhombic platelets composed of multiple, transparent layers but have a high index of refraction that partially reflects and transmits light from layer to layer, thus producing a pearly luster. Willow Voyageur pearls are selectively made with the finest South Sea finish and are superior in quality to other finishes commonly referred to as Rainbow or Single Color which are differentiated by the number of coatings. Poor imitations pearls are generally only single dipped or coated and they are commonly made using crushed old and damaged shell and/or glass and glue, which 'contaminate' and affect quality and durability.