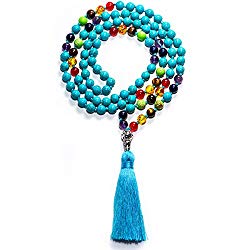 The Mala Beads Necklace is not only jewel, but also a traditional meditation tool that has been used for thousands of years. Malas can represent different people and different things. Some people focus on mala's psychotherapeutic abilities, while others use it to guide them in meditation. Mala beads 108 is a sacred number that symbolizes the removal of 108 troubles and the healing of negative emotions. Believers around the world like to use these tibetan buddhist prayer beads（meditation beads），They used to record chanting, which resulted in a blessing and strength. It is said that each gem has different attributes, energy and meaning. It can also be used as the best accessory for daily life or some special occasions. You can wear them on your neck, until you want to start meditation or practice yoga. These are natural stone mala yoga beads necklace.Mala prayer beads are hand-knotted and well-made. We use love and blessing to make each Mala bead necklace and hope it will satisfy you. Please look for and understand our name - Pneime, its implication is to make life better.

We use cookies to give you the best experience on our website.I accept