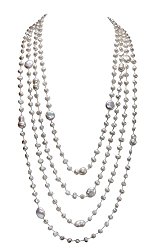 HinsonGayle's Destiny, Celeste and Selena necklaces are the pearl lover's dream. The multiple strands of shimmering pearls create an aura of enchantment. Each is meticulously handcrafted from several hundred luminescent freshwater pearls of various shapes including coin pearls, baroque pearls and tiny seed pearls. The pearls are handknotted and strung on either white or brown thread (depending on the design selected) and finished with a sterling silver T-shaped toggle clasp. The pearls were hand selected for their brilliant luster and intense orient characteristics. Orient, or pearl iridescence, is the rarest and most prized of all pearl value factors, and is only found in about one percent of genuine cultured pearls. (Selena's Ultra-Iridescent black freshwater pearls are color treated to create stunning surfaces that emit an intense rainbow of aubergine, green, blue and metallic copper hues that mimic colors found naturally in some Tahitian pearls.)