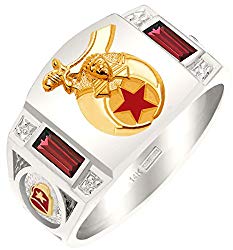 For sale is a customizable brand new men's Shriner 14k two-tone gold solid back ring made in the USA. In the current configuration, it comes with a classic Mystic Shriner emblem on top, 2 simulated red ruby stones and 2 side emblems, a fez hat & camel. See optional symbols in the picture gallery if you would like to customize the current configuration. It comes with an optional 9 top & 22 side emblems along with 12 gemstones. The Ancient Arabic Order of the Nobles of the Mystic Shriner, also commonly known as Shriners, established in 1870, is an appendant body to Freemasonry, based in the United States. In 2010 they changed its name to Shriners International, now covering nearly 200 temples (chapters) across North America, South America, Europe and Southeast Asia. The organization is best known for the Shriners Hospitals for Children it administers and the red fezzes that members wear.