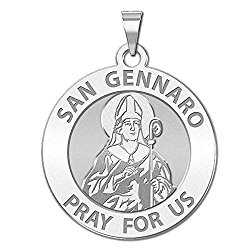 , Bishop of Naples, is a martyr saint of both the Roman Catholic and the Eastern Orthodox Churches. He died around the year 305, during the Diocletianic Persecution. He was imprisoned while visiting incarcerated deacons at the sulphur mines of Puteoli, the modern Pozzuoli. After many tortures, including being thrown to lions in Pozzuolis Flavian Amphitheater, he was beheaded at Solfatara along with his companions, who included Festus (deacon); Desiderius (lector); Sossius; Proculus of Pozzuoli; Acutius; and Euticius. The Feast of San Gennaro, originally a one-day religious commemoration, is now an 11-day street fair beginning on the second Thursday in September in the Little Italy area of Manhattan as an annual celebration of Italian culture and the Italian-American community. His feast day is September 19 in the liturgical calendar of the Roman Catholic Church. The first Feast of San Gennaro was held on September 18, 1926, by newly-arrived Neapolitan immigrants who retained the customary observance from Italy. Similar festivals have also been sponsored in other U.S. cities.,1990)