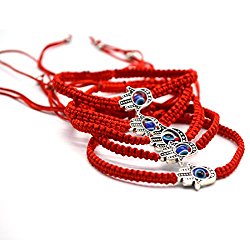 Description: Elegant Kabbalah Red String Bracelet, Amulet, Charm Embroidered, Durable, Adjustable, fits Small to large size hands (length upto 10") For Good Luck and Protection Also available in other colors and designs, please check in store Embroidered String with a charming Silver tone dangling Hamsa hand shaped Pendant, with a rotating eye inside, this is the Evil Eye Symbol for protection from bad (evil) spirits According to ancient tradition of Judaism's Kabbalah wearing the red string prevents disease, poverty and misfortune, and provides protection from the bad spirits Adjustable Length : Upto 10 inch / 25 cm Kabbalah is a mystical spiritual branch of Judaism, founded around 2nd century CE after the 2nd destruction of the holy Temple in Jerusalem, when the Romans ruled the country, by the "Rashbi" - Rabbi Shimon Bar Yochai from the Galilee, who wrote the sacred book of the Zohar. The Kabbalah is nicknamed "the logic of the unknown" and deals with Biblical texts, numbers and symbolic signs of Judaism. in recent years it gains more popularity worldwide, with famous people like Madonna, Ashton Kutcher and others showing interest in the Kabbalah and Judaism. The Zohar book was concealed for many centuries, as the study of the Kabbalah was restricted to a select few qualified individuals. It became revealed only in the thirteenth (13) century CE and published by one of the leading kabbalists living in Spain, Rabbi Moshe de Leon. According to the Kabbalah the Red String is a symbolic Amulet/charm that brings good luck and protection to the wearer against all bad - the evil eye symbolizes that, in order to prevent any illness, poverty, accidents or other misfortunes. According to the tradition it is desirable to take the red string to (our mother) Rachel's Tomb near Bethlehem and Jerusalem, and wound around the tomb for 7 times, to endow the red string mystical powers